The History of a Toilet

Toilets in the Ancient World 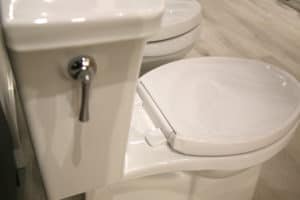 This area will have a video of Rob Hill talking about interesting facts pertaining to bathroom product information. Coming Soon

In the ancient world people were capable of designing quite sophisticated toilets. Stone age farmers lived in a village at Skara Brae in the Orkney islands. Some of their stone huts had drains built under them and some houses had cubicles over the drains. They may have been inside toilets.

In Ancient Egypt rich people had proper bathrooms and toilets in their homes. Toilet seats were made of limestone. Poor people made do with a wooden stool with a hole in it. Underneath was a container filled with sand, which had to be emptied by hand. (If you were wealthy slaves did that!)

Today in rich countries we take toilets for granted yet in poor countries millions of people do not have hygienic toilets.

Our word toilet is derived from the French word toilette, which means little cloth. In the 17th century it was a cloth cover for a dressing table, called a toilet table. If a woman was at her toilet it meant she was dressing and preparing her appearance. By the 19th century toilet room or toilet was a euphemism for a certain room.

Our word lavatory comes from the Latin lavare meaning to wash. In the 17th century a lavatory was a place for washing. Later it became a euphemism for a certain room.

On board a ship the toilets are called the heads. Originally they were just wooden boards with holes cut in them hanging over the sides of the ships. They were placed at the head of the ship.

On land there are many euphemisms for toilets. One is 'the smallest room in the house'. An old euphemism for going to the toilet was 'going to spend a penny' because public lavatories used to cost one penny to use.

Today many people in poor countries still do not have adequate sanitation. The World Toilet Organisation was formed in 2001 to improve toilets in the developing world.

View all posts by: William Lees